I had to laugh when I got home last night and Donna told me she considered buying me a stun gun for the Mexican border. Not only was she concerned for my safety, but also her own. Luckily when she spoke with a member of the PCTA they were able to assure her that there have been no incidents with hikers and illegal immigrants at the border. Phew! The most interesting stat he passed on was that 1000 people will be hiking the trail this year! Huge! Wikipedia may have to boost their 300 a year average. 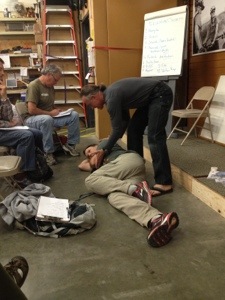 Today was the first of a two-day Wilderness First Aid Course taught by the NOLS institute at the REI store in Encinitas. We were told at the beginning that we were going to get ‘up close and personal’ with our class mates and were quickly shown the difference between ‘appropriate’ touching and ‘creepy’ touching. I was put in a group with Dave and Phil, two awesome dudes who were up for a good laugh every time we had to practise a new scenario on one another.

There was a lot to digest but I have to say I learned a great deal and feel a lot more confident heading out into the wilderness on my own. We learned a lot about spinal and head injuries, shock, bleeding and the basic data that needs to be collected by a first responder such as recording vital signs and assessing the Mechanism of Incident (MOI). They also threw in some fake blood and stage makeup to spice up the different scenarios we were thrown into. 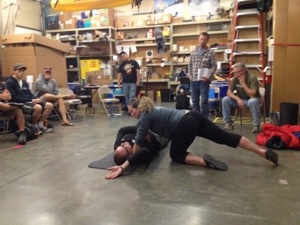 When I mentioned I was hiking the PCT there was a murmur of acknowledgement from the entire group, and a lot of people came up to me afterwards to ask questions. The more I hear about it from people who have experienced the trail first hand, the more real it becomes. Dave and Phil have promised to follow me on the journey via my blog. I also bumped into Sherria, the girl who served me at AT&T yesterday, first at Starbucks this morning and then at Walmart after the course. She was still laughing and shaking her head at the whole endeavour and said she can’t wait to hear how it goes. 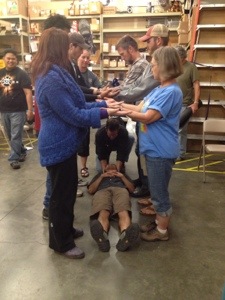 I had originally planned to spend Saturday evening experiencing the nightlife of downtown San Diego, instead I went on a mission to find HEET for my camping stove. Unfortunately the first Walmart I visited was out of the yellow antifreeze bottle. After making it halfway into San Diego I decided I couldn’t rest until I’d secured this flammable liquid and was lucky enough to find it 11 miles away down the M805. I was also lucky that Walmart stays open until 11pm on Saturdays!

I wanted to treat myself to some kind of celebratory meal following the successful Walmart expedition. I had grand plans of burger restaurants or steak houses but ended up at a quiet little roadside Subway. Still, this rates as luxury compared to what’s stashed away in my food sack for Monday! 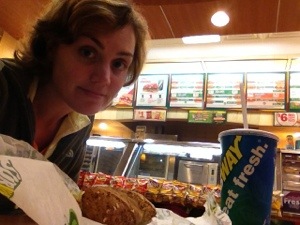