It’s 10:45pm and Wendy and I just set up camp a couple of miles out of Warner Springs. We were happy to leave the kick off a day early and get back to the trail ahead of the pack. Leanne one of Monty’s friends and her partner brought us the 1.5 hours back to the trail head. My pack was on my lap in the back seat full of 5 days of food and 6 litres of water making my legs numb for most of the trip.

We started the day with breakfast and coffee with Dr Sole before heading over to the Dirty Girl vendor tent. He made us burritos and said we could come back for lunch too. My feet are in such good shape he just did a quick clean and tape up job so no dirt could get in, then I was set to go.

I had a full list of things I needed to get done today and was happy to tick the majority off the list:
– pack up campsite and repack bag
– make a list of items to be sent in my bounce box after the shake down of gear yesterday
– post bounce box to Aqua Dulce and extra gear back to Canada
– purchase additional gear (sun gloves, 1 litre platypus bottle, belt, spork)

Once this was done I spent some time with the Dirty Girls and went to a couple of seminars on food and one for women only hikers. I wasn’t sure I wanted to go to this one and although I was glad I did, I left feeling more vulnerable than before. Some of the women who had done other thru hikes had some interesting stories about dealing with male attention on the trail, and having been at the kick off I now understand what they’re talking about. The good thing is there’s at least 20 other solo women hikers on the trail so I’m definitely not on my own out here. 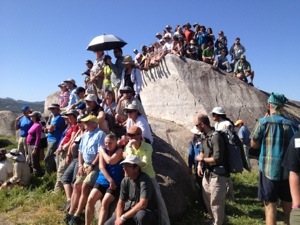 Next up was the class of 2013 PCT hiker photo and then cheeseburgers for dinner.

We said a big goodbye to Dr Sole before we left and thanked him so much for all the work he did on my and many other hiker’s feet. I encouraged him to take a short lunch break and brought him some food for dinner as the line up of patients was never ending. He may also be in Kennedy Meadows around the time I’m there, fingers crossed!

Once we were dropped off back at the trail head we decided to hike some distance from the road. My headlamp was the strongest so I was leading and could see so many creepy crawlies on the trail including spiders, giant black bugs and crickets. After a few minutes of walking we were surrounded by at least ten pairs of giant eyes reflecting in the torch light which turned out to be horses, then I also saw a huge mouse which turned around and ran towards me when my torch light hit it. I screamed and ran in circles then doubled over in fits of laughter with Wendy who also freaked out at the speed at which the mouse charged at me. We decided to find a place to camp soon after. Tomorrow morning I’m going to take it slow and get my bearings again, then start the trail anew as a solo hiker. Pac Man already made it to Idyllwild so he’s at least 4 days ahead of me now.

10 thoughts on “Back on track”