This morning when I woke up, I was covered in so much dirt and looked so thin that I could have been mistaken for one on the orphans from the movie Oliver Twist. The hot, dry and dusty stretch with no water meant the dirt had just caked on, and as I sit here writing this from my tent this evening, I’m looking at my filthy feet and limbs thinking nothing much has changed. 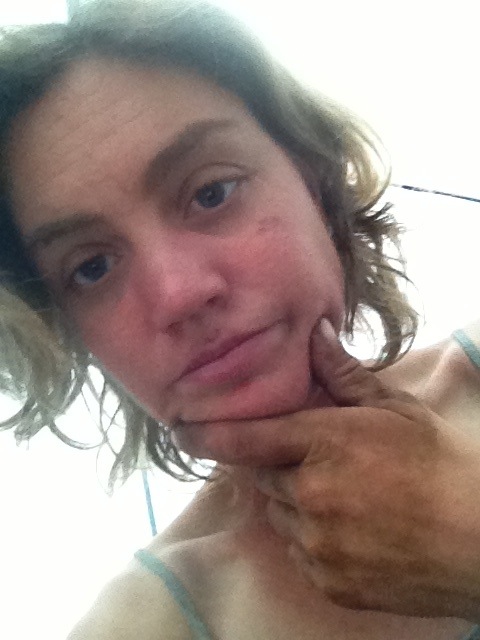 I struggled with my alarm AGAIN this morning and am unimpressed with my failing discipline to get up in the mornings. I guess I should be going to bed MUCH earlier, hopefully I’ll find the right balance again soon. I left camp just after 7am and made good miles this morning while the sun was low and mainly hidden behind the clouds. I was so determined not to stop I tried out the pee break with pack still on manoeuvre which Ladybug said took her some time to master on the trail. I’d say it was successful, but I’m not completely convinced it saved me that much time.

The trail went through a huge paddock and when I arrived at the first of many gates to pass through, there was a note left by another hiker saying ‘Beware big rattler at gate’. I scoped out the area and couldn’t see any sign of it, but it was only another half an hour down the trail that I came across my own giant rattler. I’m going to have to find myself a new camera operator as the following video shows no sign of the snake, except for the noise of its rattle, however it does focus on some lovely green shrubbery for the majority.

After getting psyched out I decided to bush whack around the trail and ended up getting caught up in the most scratchy bushes imaginable. I actually did a lot more damage to myself than the snake was likely to do from a distance. 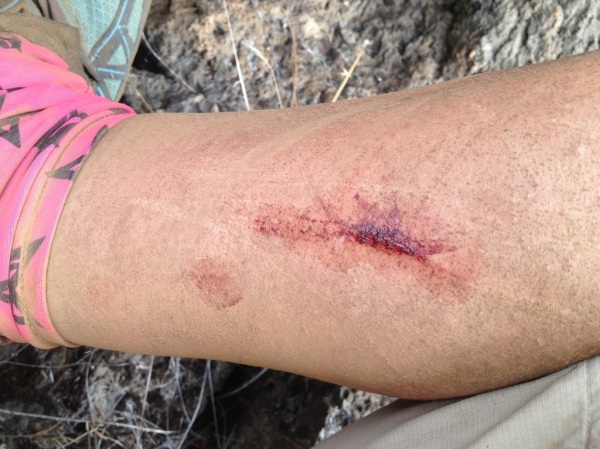 I bumped into Bill again this morning who had 8 miles to hike before hitching into Burney, so I shamelessly asked if he had any additional food at his disposal. This was firstly because I didn’t feel like digging into the bottom of my pack, and secondly because I think I may have eaten a little too much when I had a minor breakdown the other morning. He offered me a packet of crackers and two foil pockets of tuna. The combination was fantastic and I polished off both tuna packs during our 15 minute break.

I was technically still within the 30 mile stretch with no water (if the cache hadn’t been there), until I reached the reservoir. There was a hole in the water pipe creating a small fountain which I ran under a few times before heading down to the canal for lunch and a break in the shade.

I wanted to jump into the water and scrub off my filth except there were a few people fishing that I didn’t want to disturb, so I limited the bath to my feet who are suffering the dreaded ol’ blisters again because of the heat. When I left the canal at 13:30 it was stinking hot again. Luckily there was more tree cover than on the ridge, but it didn’t dampen the humidity in the air. Then just before crossing the highway to Burney I saw the best sign of the entire day…

The mile on the other side of the highway seemed to go forever, and just when I’d almost convinced myself that it must have been an old sign, there it was! There was a register, a camera for self portraits, a cooler full of sodas, water and chocolate, garbage bins, reclining chairs AND phone signal, what more could you ask for?

I sat in the recliner drinking soda for close to an hour when a golf cart like vehicle showed up and a man and his dog got out. I knew before he introduced himself that he was the trail angel so I said ‘you must be Randy!’ He was indeed, and I told him how impeccable my timing at these caches has been, as I’ve had the chance to meet and thank most of the trail angels in person. He and his wife check on the cache more than once a day and for the lucky hikers coming through this weekend, you may stumble upon a fry up if you’re lucky!

We chatted while I indulged in my second soda, but as trail karma may have it (I guess it’s a one soda only limit), when I started hiking again my stomach didn’t agree with me. It may have also been the heat, but the last 6 miles to camp were a struggle.

The campsite I was aiming for was teeming with people and young kids playing volleyball. My legs and feet were too tired to go any further, so I’m tucked away as far as possible from the mayhem and just finished off some dry cous cous and a spiced apple cider. It’s only 10pm, so once I brush my teeth and clean up dinner, I may be asleep before 11pm! Goodnight!