It’s been a long productive day for PCT prep today starting with my US visa interview at the consulate this morning. I quickly learned that even though you book a specific interview time (8:30am) it all operates on a first come first serve basis. I felt like I was walking into a maximum security prison with only four people at a time let into the holding room where they verify your identity, barcode you, then send you to the next identity check where they scan your barcode, check your passport for the second time then release you into the larger holding area where you wait for your number to be called.

Because they only allow you to take in your application papers and wallets, no one had the pleasure of their iPhone to distract them. This resulted in everyone fixating on the television screen playing a video called ‘America Is’. In the time I was there I was able to view the segments ‘America is Education, America is National Parks (my favourite), America is Diversity (or something similar), and America is Culture.

After 1.5 hours, two quick interviews, and a set of fingerprints the man told me “your visa is approved”. It was only then my heart stopped racing at a million miles an hour. I could tell I wasn’t the only one who was nervous.

On the way home on the train I missed my station and decided to make a long detour to pick up my tent from the post office. The detour was slightly longer than expected and 6.2km later walking in the hot sun in black leggings and a heavy shoulder bag I made it home. Naturally as soon as I opened the tent it had to be assembled.

With the help of my nephew Cooper we managed to set up the tent in about 10 minutes. The instructions say it will take less than a minute with practise! It’s extremely lightweight which means it’s also very fragile. With the small breeze in the backyard I felt like it was going to lift off the ground with both Cooper and I sitting in it. I think there may be a few extra set up steps I may have missed the first time around so I’m going to watch the online video for instruction. At this point the best part of the tent is that it fits back in it’s bag with ease – yes I am very easily pleased! 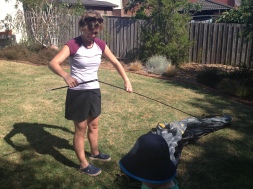 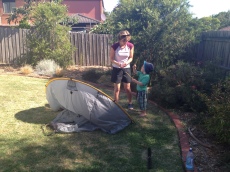 Cooper drumming with the stakes. 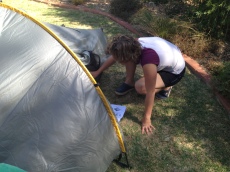 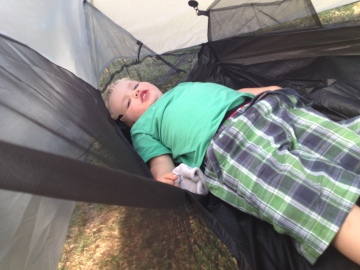 I hit an all time equipment low today after letting my old friend from the backpacking store talk me into purchasing a 47L pack for the PCT. The only thing more ludicrous than this is the fact I actually thought it would work. There are two major things wrong with this pack: 1. I couldn’t even fit my gear for the weekend in it, let alone food for 7 days, a bear canister, stove, tent etc etc. The second thing wrong are the front pockets. No only do they look absurd, they actually push against my chest which I could barely stand after walking with it for 5 minutes.

The 47L Aarn pack in question.

The only thing worse than buying the wrong pack, is not getting refunded for the pack. Oh sure I’ll get $370 worth of store credits. Just add them to the $150 store credits I have at Kathmandu. I’m going to start my own store selling credits to these places. I may just need to spend the week outside the store, offering to purchase people’s gear for them at a slightly discounted rate. It’s honestly ridiculous. So much for buying cheaper gear in the US. I’m now locked into purchasing substandard gear that’s made in China for about 5 times the price. Alas, anyone in the market for a 47L backpack?

I went camping store crazy today spending around two hours talking to Ben from Backpacking Light on Somerset Place in Melbourne. I was super keen arriving just after the store opened at 9am. We chatted gear and hiking stories over breakfast and coffee before going through my long shopping list. I’m going to ponder for another week on most of the items I saw but decided I couldn’t leave empty handed and purchased the lightest trekking poles I’ve ever seen. At around $170 you’d expect them to be good, and compared to the $30 ones I took up Kilimanjaro these feel light as a feather! I’ve got another shopping date at the store next Saturday where I might buy my pack, wind jacket, sleeping mat and a few other items pictured below that I looked at today…

First time I’ve ever seen this kind of pack. It counter balances weight on the front and back of you with all the weight carried on your hips.

Front pockets of the pack. It feels pretty good but looks downright bizarre. I’m not sold on this just yet.

This air mattress was pretty damn comfortable, even though the PCT bible says you WILL get a puncture. It folds up incredibly thin like a piece of paper. Quite impressed! 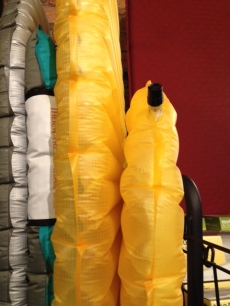 This crazy little pouch holds your ziplock bags of dehydrated food or oats etc, add water, close the bag, and it stews inside ready to eat straight from the bag… no more dirty pots.

These poles fold in a ‘Z’ shape and are honestly so light you barely feel like you’re holding anything.

With shoes ordered and on the way, it was time last night to order my backpack. I’ve had my eye on the ULA Catalyst since reading about the ULA brand in Wired’s blog. She envied the hikers who carried them on the PCT in 2011 and I was happy to see she’s got the ULA Circuit for her CDT hike.

When I clicked on the tab to order my pack I was faced with a number of options: torso size, hipbelt and shoulder strap curve shape. How do you measure your torso size? I Googled this question and watched a video from REI which told me the following:

Mum and dad sizing up my torso length.

I discovered that my torso size is 19″ and my hipbelt size is 35.5″ which means I’m a medium size for both. The excitement of torso measuring soon spread throughout my family and everyone had a turn at discovering their torso length.

My sister measured in a torso length of 20″ after discovering she has a pronounced C7 vertebra.

Then I was stumped by the shoulder strap – J curve or S curve? I realised I would have to do a bit more reading before making my selection.

I may have just purchased a pair of trail runners online… It’s probably the most ludicrous way to buy shoes for a 5 month hike but desperate times call for desperate measures and I NEED shoes for this weekend’s 3 day trek around Wilson’s Prom. There’s a 100 day money back guarantee with an entire page of fine print but I tell you what, I’m feeling confident about this one! 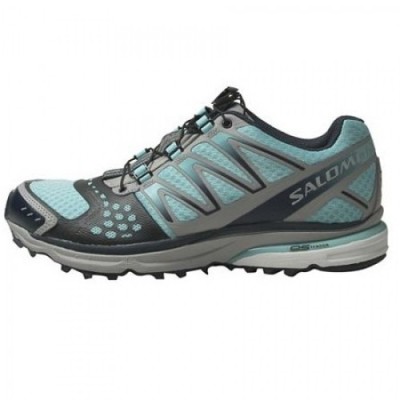 Nice eh?? Now as long as they arrive before the weekend and they fit then I’m in good shape! If I can successfully buy a shoe online then I’ll have less hesitation about ordering my pack and other gear the same way. Fingers crossed!!!

I’m happy to announce I have just made my first official PCT purchase today. My lack of equipment has started getting the better of me, and whilst I’m still debating purchasing most of my equipment in the US for half the price than in Oz, there’s a few items I would like to secure before I depart – shoes and a Diva Cup.

The delicate subject of menstruation whilst on the trail should not be overlooked, and if you’re a woman, it’s likely at the forefront of your personal hygiene planning.

Even though women from Yogi’s handbook might say they won’t get heavy periods or it might not visit at all, I know my body better. It’ll be there, rain, hail or walking over 4,000km – guaranteed.

So I’ve purchased a Diva Cup Model 1 – a silicone menstrual cup eliminating the need for pads and tampons along the trail. It’s advised to test these sorts of things before heading out on the trail, hence why I bit the bullet and finally purchased something I can’t refund this time!

Well the shoe saga continues… I took my new Saloman’s for their first test drive around the streets of East Bentleigh today and the truth is I felt like I was wearing clown shoes. They’re about 2 sizes bigger than what I would normally wear, and although this is probably what I’ll need in the deserts, I think they’re just a bit TOO big. Ho hum. I’ve literally been to Kathmandu 4 times already just for shoes and considering they know me like their own permanent staff, it’s going to be difficult to go under the radar on this return. Part of me wants to hold on and walk them in a little more, but like many things, I need to listen to my gut instincts which are telling me to try on many more shoes until I find the perfect pair!